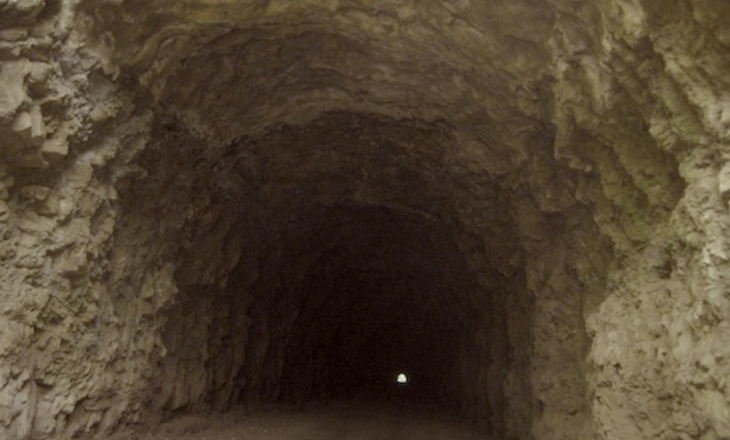 In January 1948, following the merger of Koloa Plantation and Grove Farm Plantation, Grove Farm was confronted with a serious transportation problem in that the Ha‘upu Range separated most of its newly-acquired Kōloa Plantation cane fields from its existing Grove Farm fields.

Unless Grove Farm came up with a viable solution, trucks hauling harvested sugarcane from Grove Farm fields to the Koloa sugar mill would be required to travel around the Ha‘upu Range through Knudsen’s Gap, a distance of anywhere from 15 to 25 miles per round trip — an expensive proposition.

Grove Farm’s general manager at the time, William P. Alexander, and his operations manager,William M. Moragne, decided to shorten that distance by linking the cane fields with a tunnel dug through the Haʻupu Range. For $26,000, Moragne purchased a complete set of surplus military tunneling equipment worth about $250,000, which had been stored in a tunnel at Mokule‘ia, O‘ahu.

Workers then began taking core samples by drilling into the top of the Ha‘upu Range along the projected route of the tunnel. The core samples proved to be composed of solid rock, instead of a loose mix of dirt and rock,which meant that Grove Farm would be spared the expense of building structural supports in the tunnel and sealing dirt pockets with cement. Significantly, from the standpoint of safety, drilling the tunnel through hard rock would minimize the danger of cave-ins.

Moragne then delegated the tunneling project to longtime Koloa Plantation civil engineer and Māhā‘ulepūBeach resident Elbert T. Gillin, assisted by supervisors Charles Peterson and Carl Minium. Drilling from the Koloa side of the Ha‘upu Range began on a half-mile long, 20-foot-wide by 20-foot-high tunnel in September 1948.

It was an outstanding feat of engineering.