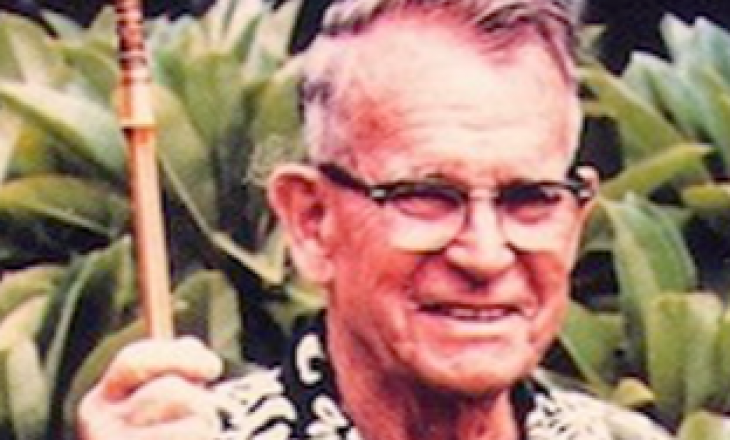 In 1953, at his home in Lihu‘e, Grove Farm Manager William Middleton Moragne Sr. (1905-1983) made the first recorded controlled cross-pollinations between plumerias that produced new hybrids. Prior to Moragne’s successful cross-pollinations, Hawai‘i’s introduced plumerias — the yellow, red, and white — had been hybridized naturally by small insects, resulting in many variations.

But, in 1950, when Moragne began his research, there was no literature available on how to crosspollinateplumerias artificially. Undaunted, he began on his own by observing that the plumeria’s pistil, which contains the flower’s female reproductive parts he would need to pollinate, was located at the base of a deep trumpet ofpetals that was inaccessible from the top of the blossom.

Tearing away petals to reach the pistil only flooded the pistil with milky latex. The solution lay in carefully snipping off the petals at the base of the blossom, which caused the latex to flow away. With the problem of flooding solved, Moragne proceeded to attempt a crosspollination.

He brushed away the existing pollen in the pistil of a mother flower, introduced pollen of a male parent on top of the pistil and covered the pollinated areas with tape to prevent unwanted pollination by insects. However, his attempt failed and other efforts at cross-pollination continued to be unsuccessful until 1953, when he tried introducing pollen, not only on the top of the pistil, as he’d done previously, but also on the pistil’s sides and bottom. He achieved success.

By using a dark red “Scott Pratt” male to pollinate four light pink “Daisy Wilcox” female blossoms, Moragne produced enough seeds to grow 283 hybrid seedlings. Of those, he kept 35 of the best, which grew into flowering trees. From among the 35, he selected and named his favorite blossoms for the women in his family.

His hybrid plumerias can be seen along Nawilwili Road.