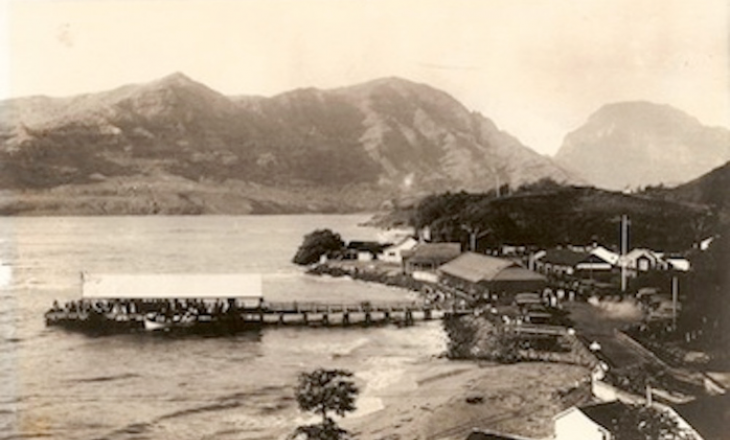 From the early days of Hawaiian settlement on Kauaʻi to the arrival of Capt. James Cook in 1778, Nāwiliwili was a center of island life, a home to fishing and taro farming. Then with the advent of westernization in the early 19th century, Nawiliwili Bay also became an important harbor on Kauaʻi’s eastside.

Prior to 1921, anchorage off Kukui Point was the closest inter-island steamers and sailing vessels could proceed into the bay safely. Mooring any closer to shore in the sandy-bottom bay put them at risk of being dashed on the rocks by ocean swells.

In those bygone days, inter-island steamers sailing from Honolulu in the afternoon would arrive at Nāwiliwili in the middle of the night. Passengers would climb down the sides of the steamships on rope-and-plank gangways and step into longboats to be rowed to the pier.

It was not until the breakwater was built in 1921, which was financed by sugar baron and philanthropist George Norton Wilcox (1839-1933), that Nāwiliwili had a truly safe harbor. In 1927, Wilcox, then 88, directed the construction of the shoreline seawall. When work wrapped up the following year and fill was later dumped behind the seawall, the Nāwiliwili shoreline -- which had run on a direct line from Kalapaki Beach to Niumalu – vanished.

Wilcox owned a beach house on the old shoreline at Papalinahoa, when Wilcox Road -- now well inland -- skirted the shoreline. His house stood by the now famous banyan tree that he planted long ago and today is on the property the Banyan Harbor Resort. Another noteworthy resident of Papalinahoa for more than 30 years was Gov. Paul Kanoa. His home, an old-fashioned, Hawaiian-style structure of square rooms atop stilts under a thatched roof, stood at the foot of the bluff, set back from the beach. Kanoa’s son, Paul P. Kanoa, governor of Kauaʻi from 1882 to 1886, resided at Niumalu, where he hosted many a merry, late-night party during his governorship with guests like King David Kalakaua.