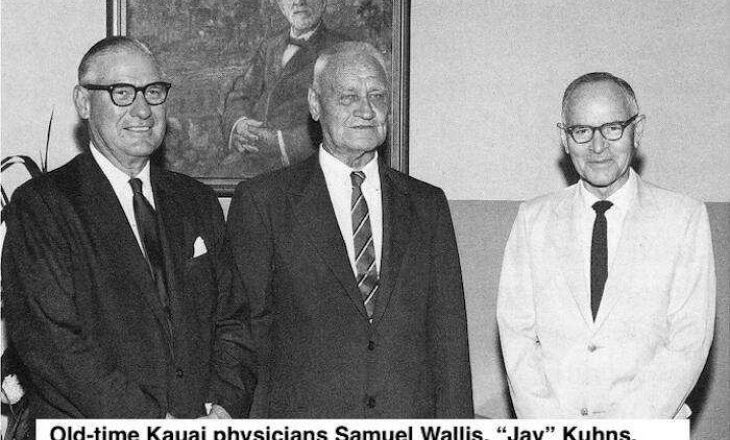 Firstly, sometime between 1849 and 1854, when James F. B. Marshall was manager of Līhu‘e Plantation, John Cook, an English carpenter who’d built some of Līhuʻe’s earliest buildings, suffered a stroke that rendered him paralyzed and unconscious. He was, in fact, pronounced dead.

However, when a friend of his who’d come to view his body lying in a coffin noticed a twitch of Cook’s eyelid, manager Marshall, who was often called on in emergencies, was sent for immediately and performed a miracle of sorts by restoring him to consciousness after several hours’ application of massage and medication.

Secondly, years later, Charles Rice (1876-1964), a grandson of Lihu‘e Plantation’s second manager, missionary William Harrison Rice, recalled that his parents, William Hyde and Mary Waterhouse Rice, were busy vaccinating Lihu‘e residents during an epidemic that infected Kaua‘i when he was a boy. Although Rice did not specify the epidemic, he did recollect that some Kaua‘i folks fell victim to it when they mistook the slight fever the vaccinations produced for a rise in air temperature and went swimming to cool off. This further weakened their already-low natural resistance and allowed the disease to run its course with fatal consequences.

Thirdly, Kauaʻi’s first hospital, housed in a small, 20-bed building, was built in Kōloa by Kōloa Plantation sometime during the 1880s. A few years later, Dr. Jared Smith erected a second small hospital in Kōloa near his home with government assistance.

Kauaʻi’s third hospital, the 30-bed Līhu‘e Hospital, was built in 1898 for the benefit of Līhu‘e Plantation and the Līhu‘e District, under the direction of Paul and Hans Isenberg, upon four acres of Līhu‘e Plantation land alongside the Lihu‘e-Kapaia road at a cost of $10,000.

Construction was financed by the stockholders of Līhu‘e Plantation, with George Norton Wilcox and Albert Spencer Wilcox contributing liberally to the building fund.

Līhu‘e Hospital was replaced in 1938 by the 86-bed G.N. Wilcox Hospital, named in honor of Mr. Wilcox.

Over the years since then, G.N. Wilcox Hospital expanded, modernized and evolved into the present Wilcox Medical Center.