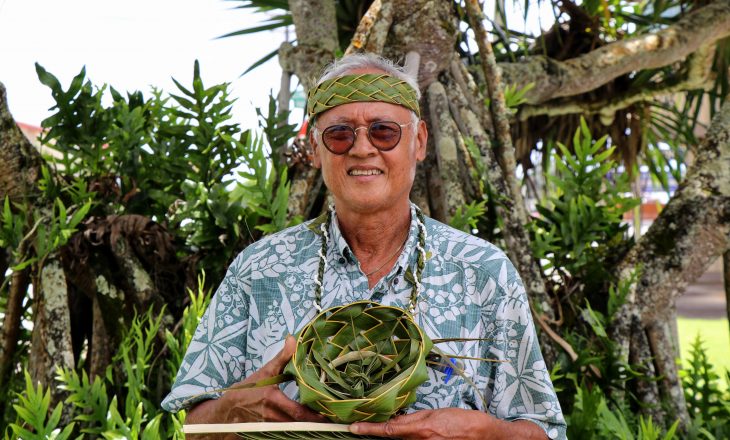 A natural storyteller – articulate, engaging, and full of life – Eugene “Onio” Punzal generously shared his moʻolelo. He starts by saying, “I was named Eugene after Eugenio Maria Giuseppe Giovanni Pacelli.” And before you can begin to wonder “who?,” you learn that Pacelli was the Catholic Pope at the time he was born. Eugene’s nickname “Onio” was shortened on the playground but was derived from “Oni-ong,” which is what his dad called him. Quick-witted and always speaking at a fast clip, his story begins with his days working at the Coco Palms Hotel to his wanting to perpetuate the art of weaving to the next generation.

Before and after his three years spent in Japan earning a degree in the Japanese language at Tenri University, Onio worked at the famous Coco Palms Hotel in Wailua. He relived the Coco Palms Hotel torch lighting ceremony with incredible clarity – describing the silent darkness, mimicking the drumbeat, then recounting the lighting of about 90 torches. He was a torch runner, and you can almost envision the pageantry as it unfolded. He played many roles at Coco Palms and spoke with regard of Grace Guslander, Mele Ana Soong, Sarah Sheldon, Big John Kauo, Larry Rivera, and Andrew Kane – who were all part of the famous Coco Palms dinner and show.

He is a master weaver – particularly of coconut fronds – and also works with lauhala. Onio learned the art of weaving coconut leaves from lifeguard George Miki. Why he does what he does is his strong desire to perpetuate the culture – “teaching our youth, so these practices live on.”